A special Kabbalat Shabbat service will be held on June 19 at 7 p.m. in celebration of Pride Month and the Jewish LGBTQ community. The service will feature the beautiful voice of TBE’s Cantor Magda Fishman along with two extraordinary musical talents: Alicia Svigals and Uri Sharlin. Readings and songs to mark the occasion will also be included. 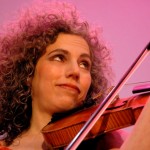 Alicia Svigals is the world’s leading klezmer fiddler and a founder of the Grammy-winning Klezmatics. Awarded first prize at the Safed, Israel international klezmer festival, she almost singlehandedly revived the tradition of klezmer fiddling, which had been on the brink of extinction. The heralded lesbian violinist is also a composer who works in many genres, and was recently selected to be a 2014 MacDowell Fellow. Svigals has played with and composed for violinist Itzhak Perlman, the Kronos Quartet, playwrights Tony Kushner and Eve Ensler, the late poet Allen Ginsburg, Robert Plant and Jimmy Page of Led Zeppelin, singer/songwriter Debbie Friedman, Avraham Fried, and many others. She has appeared on David Letterman, MTV, PBS’ Great Performances, NPR’s Prairie Home Companion, Weekend Edition, and on the soundtrack for the L-Word. 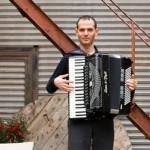 Uri Sharlin is a Brooklyn-based composer, accordionist, pianist and arranger. Born in Israel, he moved to New York where he graduated with honors in Music Performance from the City College of New York. He has become known as a “wonderfully free flowing accordionist” (All About Jazz), as well as for his “masterfully crafted arrangements” (AllMusic.com). In his albums, Sharlin’s jazz and classical background fuses with Balkan rhythms, Arabic modes and Brazilian harmonies, and he combines carefully-structured compositions with loose and experimental improvisations. He has formed collaborations with prominent musicians such as Antony and the Johnsons, Natalie Merchant, Avi Avital and Frank London, and was featured as a pianist and composer in the acclaimed HBO series Flight of the Conchords.