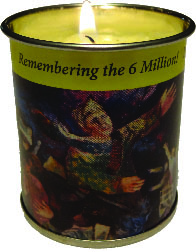 The TBE Men’s Club plans to deliver a Yom HaShoah Yellow Candle to everyone in the congregation by March 30. Please watch for your delivery and join with Jewish communities throughout America to “Remember the Holocaust” by lighting this special candle at the start of Yom HaShoah, Wednesday evening, May 1.

The Yellow Candle was created in 1981 by the Federation of Jewish Men’s Clubs in Canada, New England and elsewhere to keep alive the memory of the Six Million who perished in the Shoah. The candle is modeled after a traditional Jewish memorial Yahrtzeit candle that burns for 24 hours during periods of mourning and on the Yahrtzeit anniversary of a family member. The candle’s yellow wax serves to remind us of the yellow arm band which Jews were forced to wear during the Nazi regime.

Please make a donation to ensure that we can continue this program to help fund Holocaust rememberance programs for our congregation.